Our Vice-chancellor, Professor Lap-chee Tsui, and a few senior staff members from HKU office had visited Toronto in October 2004 as they conducted a tour titled “The New Silk Road: A Renaissance of Asian Development” around North America to promote the university.

A luncheon was hosted by the Canadian Club on October 29th (Friday) in partnership with the Hong Kong Economic and Trade Office, the HKU Alumni Association of Ontario and the Hong Kong-Canada Business Association. Professor Tsui commented on the unique role of HKU in providing expertise and intellectual exchange for mainland China as our Alma Mater has become the World Trade Organization’s Regional Training Centre for government representatives from 32 countries in Asia.

The Assocation hosted a dinner for Professor Tsui and the HKU staff on October 30th (Saturday) at Dragon Dynasty Restaurant in Scarborough. We were encouraged by the number of alumni who showed their support. Twelve tables were formed at the dinner and a lot of us were enthusiastic at the Q&A session on HKU’s role in the dynamic educational landscape. Our Vice-chancellor has certainly worked his charm! 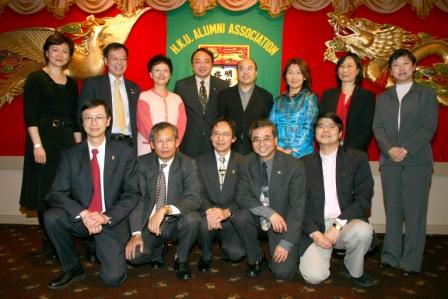 Professor Lap-chee Tsui with the board of directors at the dinner on October 30th.

Dennis Au-Yeung delivered his first report as the President with the presence of an encouraging number of alumni who have made very constructive comments on the association’s activities and alumni affairs.

First time ever we have had bowling at the association’s function. It proves to be an all-time favourite for everyone regardless of age. A buffet dinner followed after a few rounds of games. We then spent the evening on the dance floor doing line dancing. For those who spend most of their time in the office, this activity is certainly challenging as it requires good physical co-ordination and sensitivity to the musical rhythm. But it was agreed by all those who participated that this was indeed an enjoyable and recreational evening! 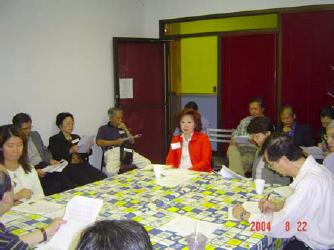 Members’ enthusiastic participation in the 2004 AGM

The 2004 International Joint Function of HKUAA was held in the United Kingdom. The arrangements were made by HKUAA UK Chapter. Dennis au-Yeung represented our Association to attend the function during July 2-3, 2004. The Reunion Dinner was held at the Ballroom of the Four Regions Chinese Restaurant, London on July 2, 2004. Professor Cheng Kai Ming, Pro-Vice Chancellor of HKU made a speech at the dinner. The dinner was attended by approximately 100 people, including Rayson Huang (Vice Chancellor of HKU in 70’s) and alumni members from UK, Hong Kong, Singapore, Australia, Canada and USA. On July 3, 2004, a tour of Stratford and Oxford was arranged. Approximately 40 people joined the tour and there were a lot of funs. The Closing Dinner of the International Joint Function was held at Phoenix Palace Restaurant, London and was attended by 40 people.

We celebrated the Year of the Monkey on February 1, 2004 (Sunday) at the Times Square Dynasty Restaurant in Richmond Hill. It was a big gathering of old friends and new faces. HKU exchange students from all across Ontario got together to share the warmth and new year’s wishes. We also had a record number of prizes for the lucky draw. Mr. Kenneth Cheng, Deputy Director of Hong Kong Economic and Trade Office conducted a speech on the current affairs and economic outlook of Hong Kong. 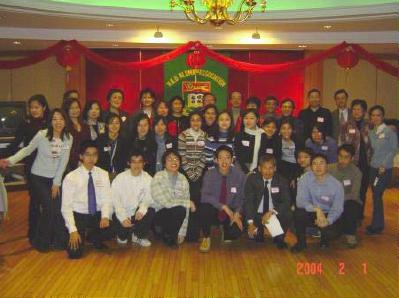 The Association has been a sponsor to the debate competition organized by the Ontario Inter-Collegiate Chinese Debate Alliance (OCDA) in the past few years. Some of our board members have acted as the adjudicators as well. The OCDA is a non-profit student organization consisting of students from six prominent Ontario universities and their objectives are to promote Chinese culture in Canada, to enhance analytical and communication skills of the participating students and to encourage academic exchanges among universities.

Their second round debate schedule in 2005 is as follows:

Augustine Chan, our director, presenting trophy to the winning team