Special Reception For Elsie Leung Hong Kong’s Secretary for Justice, Ms. Elsie Leung, visited Canada in November 2003. At a reception in Toronto on November 19, 2003, she met with over one hundred Chinese community leaders and gave the audience an update of the “One Country, Two Systems”. 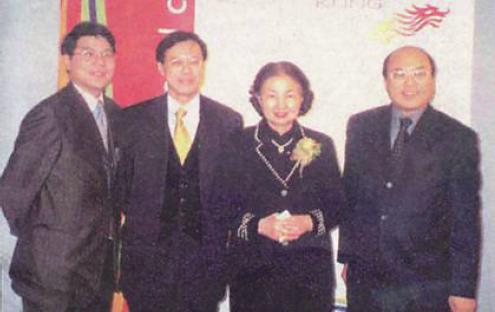 Representatives from our Association were Dennis Au-Yeung and K.B. Ng.

The Annual General Meeting was held on August 17, 2003 at the Shangri-La Banquet & Convention Centre in Markham. Our Immediate Past President, Timothy Cheng, presented the Annual Report for 2002 – 2003 and a new Board of Directors for 2003 – 2004 was elected:

Dennis Au-Yeung delivered his first speech as the newly elected President. Dr. Li , an alumni member attending, then gave an update on the research progress of osteoporosis. It was a warm and relaxing evening and we managed to enjoy a delicious summer barbeque dinner and shared a few jokes with Dr. Chan, another alumni member. 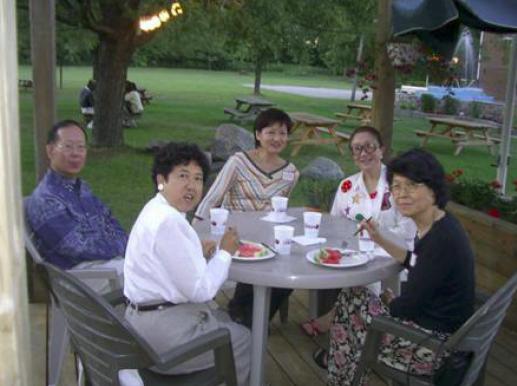 It was a public forum held on May 20, 2003 at the University of Toronto. Highlight of the event was a speech by our Vice-Chancellor, Dr. Lap Chee Tsui, on East-West co-operation in the fight against SASR. About 70 people including some alumni members attended the forum. The Association made a contribution to the Canadian Multi-Cultural Council as a co-sponsor of the event.

Severe Acute Respiratory Syndrome (SARS), the mysterious and deadly disease, has severely interrupted the daily lives of our friends and loved ones in Hong Kong and Asia. At home, our economy is just picking up its pace after being hit twice by the outbreaks.

Our Alma Mater has played an outstanding role in this battle: “

Our Association has also actively lend our emotional and financial support. We have participated in the “Tribute to Health Care Professionals in Hong Kong and Canada – Signature Campaign”, which was organized by Hong Kong Economic & Trade Office after initiatives by HKU alumni in B.C. Within two weeks, 275 organizations and 4,255 individuals have shown their support and appreciation of the front-line health care workers who not only demonstrated professionalism but also the beauty of human nature in times of crisis.

Our Association continued to sponsor the debate program by contributing $1,000 as scholarship prizes to the winning teams. Some of our Board members supported the program to volunteer to be judges for a number of matches. There was an award dinner held on March 20, 2003. Dennis Au-Yeung and Augustine Chan represented our Association to attend the award dinner.

The Annual Spring Dinner was held on February 16, 2003 at the Times Dynasty Restaurant in Richmond Hill. About 80 people attended the dinner with a record number of exchange students from the HKU mentoring program. It was a gathering of two generations (at least!), who shared the warmth of being together and enjoyed the most creative and entertaining performances by the mentees. 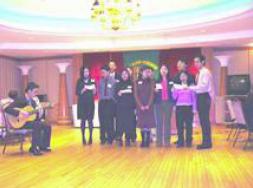 Mentees performing at the Spring Dinner 2003

Our Association has been actively supporting the HKU mentorship Program. Every year, a number of HKU students came to Ontario universities for one or two semesters on exchange program to enrich their learning experience and to broaden their life horizon. Some alumni members would volunteer to be their mentors – to make them feel at home in this foreign land – and in turn, got energized by their youthful and enthusiastic spirits.

On November 30, 2003, we organized a gathering of twelve mentors and mentees at John Liu’s residence. John is one of the Directors of the Association. It was a great moment to share – those from Hong Kong told us what’s new at our Alma Mater and we in Toronto told stories of those good old days. It was also a fun time to challenge each other at the karaoke contest. In this summer-like afternoon, two HKU generations remembered the past, enjoyed the moment and looked ahead to the future. 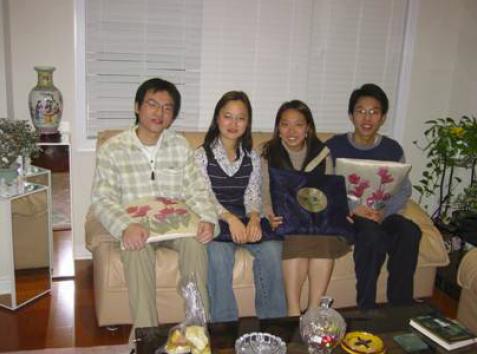